This article was transcribed from the text in the file available here.

The research of properties of Lippmann’s images obtained on dichromated gelatin plate shows that image color depends on wavelength of radiation as well as on its intensity. It relates to heterogeneous swelling of gelatin and structural changes of its unirradiated parts at fast dehydration.

Unusual behaviour of Lippmann’s images on dichromated gelatin plate may be used for producing selective mirrors for reflecting graphic information and date registration and image processing.

There is [1] a method of obtaining color image based on registration of standing waves in the volume of thick transparent photographic emulsion. Period of registered interference structure is unambiguously related to the length of the wave of radiation influencing the plate. This assures right color rendering of photographed image if disposed to white radiation. This method wasn't widely adopted because of big technical problems.

Development of holography leads to creation of a totally new technique of experiment and new registering mediums. There appeared some announcements that Lippmann’s images have been tried on modern emulsions like ЛОИ-2 [2,3] and on dichromated gelatin [4,5].

The aim of this work is to investigate the behaviour of Lippmann’s images made on dichromated gelatin as well as mechanism of image formation and possibilities of its application on practice.

Method and results of experiment

Lippmann’s method is basic for making dichromated gelatin plates [6]. Holographic plates ПЭ-2 and ЛОИ-2 were placed into acid fixing solution then washed in running water and dried at room temperature. The plates were sensitized right before exposure. For this the plate was placed for 5-15 minutes into 1-5% solution of dichromated ammonium and after its runoff dried by hot air current at temperature 100-150°C. The duration of drying is 3-5 minutes.

Scheme of device for contact printing of Lippmann’s images is displayed on image 1. Widened laser beam is directed onto registering medium. The radiation passed through reflected from plate glass spreads in reverse and forms a standing wave in the volume of registering medium the amplitude of which depends of negative passing. As the source of radiation lasers ЛПМ-11(442nm) and ЛГИ-21 (337nm) and mercury lamp ДРШ-250 were used. Besides direct projecting printing of enlarged images was realized with help of a usual photographic enlarger.

Processing mode of exposured plates hardly differed from that of dichromated gelatin for obtaining hologram [7].

Images obtained using the foregoing method have a number of interesting qualities. If watching at an image in reflected light (almost natural light rays falling) different parts of the image get different colors according to density of initial negative. The image gets blue color under transparent parts and red color under opaque ones. Half-tints of negative are reproduced by hues from orange to green. From this follows that interference structure period depends on length of radiation wave as well as on its intensity.

A Lippmann’s image if placed on a black sheet of paper and watched at broad angle will be black-and-white. Gelatin remains transparent under transparent parts of the image and gets milkwhite under opaque parts. In this case the image is not reproduced by light absorption but its dispersion that resembles the properties of display on vesicular materials [8].

To investigate the dependence of image color on the exposure within one plate a number of exposures was done by collimated laser beam. There were made also photos of sensitometric wedge image and then spectrums of transmission of the received images measured.

On image 2 there are spectral characteristics of images obtained on ПЭ-2 plates sensitized by 1% ammonium solution at exposure by laser ЛПМ-11 (image 2,a) and ЛГИ-21 (image 2, г). It follows from the analysis of spectrums that spectrum reflection width (image 2, e), length of wave maximum reflection (image 2, в) and density of image (image 2, б, д), change according to exposure amount. It is significant that length of wave maximum reflection at considerable exposure does not correspond to the length of radiation wave of the record. It’s due to increasing period of interference structure at layer processing.

Image color change evokes change of its density (image 2, б, д). These dependences are similar to characteristics curve of nigrescence of simple registering mediums. Nevertheless photographic width of linear region is much smaller. Dispersion of experimental points is especially considerable in regions of high exposure that can’t be explained by measurement errors. We can suppose that dependence of image transmission in region of saturation has oscillating character as demonstrated for example on image 2, д.

Preparing plates to sensitizing they should be placed into water for a period of time (about one hour). As a result gelatin gets swelled and long protein molecules swivel in the way to create linear chains. It relates more to molecules on the surface of the layer than those which are deep in as they are less exposed to strength of adjacent molecules. There appears a heterogeneous hardening increasing from the layer surface to substrate. Superficial gelatin molecules forming linear chains can no longer perform work as they took favorable energetic position. Molecules deep in the layer have some amount of potential energy. Their interaction with each other and molecules of gelatin hardener prevents their forming linear chains. This hardening can be defined as value inversely proportional to work performed by molecules when processed in water. The layer is not hardened if molecules realized their potential. The layer is hardened If they didn't realize their potential energy when processed in water. Distribution of potential energy in the thickness of hardened layer may be presented in diagram form as demonstrated on image 3,a.

Let’s consider processes taking place at hardening of exposed layers. Here we consider that photochemical transformations Cr (VI) to Cr (III) is realized according to model described in work [9]. At low exposure energies the number of photographic connections between the molecules created in bulge points is also small. Distribution of potential energy of molecules in hardened layer is demonstrated on image 3,б. At enduring processing in water besides hardening of layer in nodes of standing wave there may occur local gelatin dissolution. In other words hydrated molecules get relatively free changing their structure but can’t leave the layer because of hardenings in bulge. Work [10] and [11] describe that gelatin structure change at processing in water as well as at it’s drying. Therefore when processed by isopropanol change of gelatin structure in nodes and bulges are realized different ways. At considerable loss of water molecules don’t have time to return to initial state so they are forced to create a new molecular netting different from that which is created at simple freezing or slow drying. Gelatin density decreases in bulge points of standing due to growth of layer volume and increases in bulges due to change of structure under influence of formed Cr (III). As a result gelatin loses its elasticity. Increased period of interference structure can also be registered in the layer. Increasing exposure involves increasing of potential energy modulation in swelled layer. Number of isophased surfaces recorded in layer increases (image 3, в,г,д). Width of spectrum reflection and displacement to red region decrease but diffraction efficiency increases.

Performance of black-and-white image can be explained by change of gelatin structure. Unstructured spots cause considerable light dispersion and get milk-white colored.

Unusual properties of Lippmann’s photos made on gelatin plates can be used for producing selective glasses as well as for receiving pseudocolor slides from black-and-white negatives and image processing and registration.

Possibility of using Lippmann’s photos as selective glasses follows directly from image 2. Length of wave reflection and half-width depend on exposure value. At this coefficient of reflection reaches 99% that allows using such glasses in laser resonators, interferometers Fabri-Perot and also as beam dividers in hologram devices.

They cost less than interference dielectric glasses. There is also possibility of producing glasses of almost any size as well as distribution of spectrum characteristics within glass plane. Pseudocolor slides received from black-and-white negatives may be used for transmission of graphic information for example schemes, tables, diagrams. Slides can be projected at passing light by simple slider as well as at reflected light by epidiascope. It’s better to give preference to the second variant as color gamma is fuller and image contrast is higher then.

from this follows that change of color of Lippmann’s photo is linearly dependent on negative density.

Last time in increasing frequency is used the idea of complex spacial distribution of different physical values by conventional colors for example at image digital processing [12]. This quality is inherent to Lippmann’s photos taking in consideration their nature. Lippmann’s coloring method has an advantage: such image may further be optically processed. Observing a pseudo-colored image through a light filter with gating line Δλ we can see details of initial image in the interval of densities ΔD.

Details of interest of image may be marked by change of wave length of light filter. Diapason of densities may as well be marked by changing its half-width. If you make a photo of image observed through interference filter on a contrast photographic material you can receive image of lines of same density – equidensite. To illustrate this image of Jupiter was processed. For this the image of astro negative was printed with enlargement on dichromated gelatin plate. Then was made photo of received image through interference light filter with λ=640 nm and Δλ=90Å. Photo of initial image is presented on image 4, a. On image 4, б, в there are series of photos made at different angles of interference light filter incline that is at different λ and Δλ. You can see that even in conditions of incorrectly organized experiment (setting of wave length of light filter is realized by its incline) you can discover more details on received images than on initial negative. 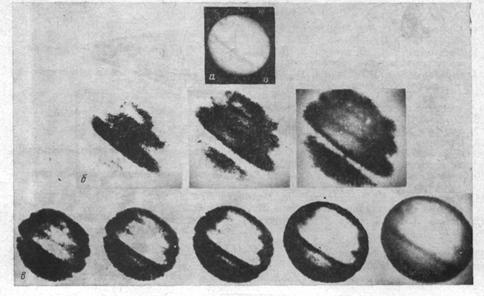 Thus Lippmann’s photos received on dichromated gelatin plates using sources of monochromatic light have properties appreciably different from those of usual Lippmann’s photo. It’s related to properties of medium of registration. Period of fixed interference structure depends not only on length of radiation wave but also on its intensity. As a result there is a possibility to unambiguously transform light intensity to color. Simplicity of method of receiving Lippmann’s photos, possibility of using sources of low coherent length and high difraction efficiency offers a wide range of possibilities in practicing this method.

In conclusion the author estimates as his pleasant duty to express gratitude to V.P.Sherstyuk, and L.E.Mazur for their important discussions, to V.A.Kaminskaya and L.E.Nikishyna for assistance in leading spectrophotometric measurement and to V.N.Dudinov for his kindly giving us astro negatives.