This is the Blyth diffusion method for making silver halide holograms on glass plates and wine glasses.

This method is an advancement on my original system[i] where I first coated gelatin onto a glass surface and then diffused in silver salt to make it photosensitive. (This idea was then also found to be very useful to use on other pre-coated polymers).

Now a real effort has been made here to make this method useable for the home-based amateur using only items purchased from the Internet or from local shops. The new “age of terrorism” has now blocked the availability of chemicals from the large manufacturers to the private addresses of peace-loving DIYers .

The silver concentration used here is now three times higher than that used previously and this has raised the diffraction efficiency and much increased the photosensitivity. Previously it was found that pushing the silver concentration up to such a high level caused severe grain growth and grain growth has always been the bane of all silver halide holographic emulsion makers and even a century before them, for all emulsion makers for making Lippmann colour photographs. Here I have made 3 break-throughs in this new system. No.1: I discovered that I could greatly increase the concentration of silver ion without causing the dreaded severe grain growth phenomenon, provided that even the lowest levels of chloride ion residing in the pre-coated gelatin film could be first removed and that this could be simply done by first soaking the gelatin coating in a concentrated solution (soln) of potassium or sodium nitrate causing an ion exchange mechanism. No.2: I found that if I made my gelatin “emulsion” with silver chloride (AgCl) rather than the conventional silver bromide (AgBr), I was able to increase the photosensitivity by a factor of 3. The hologram still finishes up made in the conventional higher diffracting AgBr because I use a conventional bleach formula containing bromide ions. No.3: there is usually something present in shop-bought culinary gelatin which causes a degree of chemical fogging in the development step and that this could be prevented by simply adding a small quantity of copper sulphate to the gelatin soln prior to coating the film. 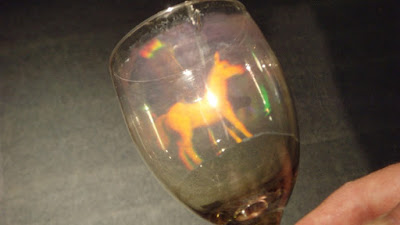 By pre-swelling before the exposure is made with a HeNe red laser, the holographic horse is yellow rather than red. By preswelling still more the horse image is green as in above photo

Chemicals available from the Internet

The first 2 on this list are especially important to be the purest you can get off the Internet. The rest are less critical but should be better than 90% pure if possible. Some of these chemicals will be used for making up the developer and bleaching solution later after the plates are made. The chemistry there will be dealt with in a separate section.

Silver nitrate (AgNO3) This is available in 10g quantities. It needs to be as pure as possible via AMAZON or eBay.

Potassium Nitrate “Food Grade” via eBay or AMAZON. “Food Grade” has worked OK. But it does have the disadvantage of containing an anti-caking agent. When a 10% solution is initially made up, this agent causes haziness instead of making a completely clear solution (soln). This haze will also stain the finished gelatin film. So one must make up the soln well in advance before use, then allow the agent to settle out and then carefully decant off the upper clear soln into another bottle. High purity sodium nitrate would be best but most offers are of lower purity than the food grade potassium salt, the offers also are confused with the completely unsuitable sodium nitrite.

Sodium Chloride. Normal supermarket grade seems to be OK here. Even though it may contain small amounts of an anti-caking agent such as sodium ferrocyanide.

Chromium Potassium Sulphate (or Sulfate) via AMAZON or eBay. This should be a purple powder . It is also called Chrome Alum. The green powder sold as Chromium sulfate (basic) is not suitable. Straightforward “Alum” or aluminium potassium sulphate is apparently useless as a gelatin hardener for us here.

Acridine Orange via eBay (but not AMAZON). This is listed as “microbiological stain”. A bottle of 5g listed as “50%” from APC has worked well for use with a 532nm laser pointer .(Unfortunately the dye needed for red lasers I have only managed to get direct from Sigma-Aldrich or other big chemical companies , see section 19).

Methanol 1 litre via AMAZON or eBay.

Copper sulphate or sulfate. The blue crystals are easier to obtain than the white anhydrous compound, so my formulations are based on using the blue pentahydrate from eBay or AMAZON.

Sodium Carbonate anhydrous. From eBay, (this must not be the very impure “washing soda” crystals).

Sodium Hydroxide from eBay. A quite good grade is needed, (not the one sold just for clearing drains).