Difference between revisions of "Beginner's Corner" 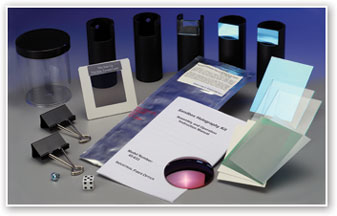 The "original" hobbyist's approach to holography was described in the May 1979 issue of Physics Education as the aptly named Sandbox Holography. Metrologic produced and sold an identically named kit. The kit included some holographic film, chemicals for processing the film, and few lenses and mirrors. Not included were the laser (and at the time, that meant a moderately pricey helium-neon gas laser) nor the sandbox.

Holography is extremely sensitive to movement, even microscopic movement, during the exposure. In conventional photography, movement will blur the image. With a hologram, since movement would completely alter the interference pattern between the direct and reflected laser light, the image can be lost completely. The sandbox was used to help eliminate vibration.

In the late 1970's and early 1980's, the Metrologic Instruments Sandbox Holography kit might have cost you $150(US). A suitable laser, another $400 or so, and by the time you had the sandbox set up, you would be out $600 to $700 in 1980 dollars. For the curious, an updated version of the kit is still available from Industrial Fiber Optics. Industrial Fiber Optics purchased the educational laser and kit product line from Metrologic Instruments in November 2004.

Although the Sandbox Holography manual has details specific to the sandbox kit, it still provides a general introduction to holography for the beginner. 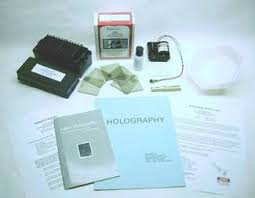 Diode lasers, like the ones found in common laser pointers, have completely changed what is needed for a suitable beginner's kit. You still need film and processing chemicals, but your first hologram can be made with no additional lenses or mirrors (because the diode laser beam naturally spreads), and there are some simple techniques developed over the years since the Sandbox kit was first introduced to eliminate the sandbox.

In the new era, sandbox holography has evolved into Shoebox Holography, and there are now three, relatively economic ways for novice holographers to begin their hobby.

For the truly novice holographer, the Litiholo kit is a a bit of an oddity. With it, you can produce your first, interesting hologram. The kit comes with 20 plates, so there is plenty of opportunity for experimentation and the inevitable failure. Be aware, though, it is a self-contained unit. The holographic plates are self-developing, and the configuration is limited to the setups the kit intended.

For the mildly curious individual or the elementary school aged child, the Litiholo kit is fabulous. For the slightly experienced holographer, it is good, if for nothing else than the exposure to polymer photo-materials. For the true beginner, though, it is a little like buying a TV dinner because you wanted to learn to cook. There is not enough "participation" to engage the beginner.

Of the remaining two choices, simply buying a kit from Integraf saves you all the hassle of acquiring the parts individually. Plus you end up with a higher quality laser than what you would get from an ordinary laser pointer. Some laser pointers have stability issues that may be unnoticeable in normal use, but disastrous in holography.

The information that comes with the Integraf kit, or the identical material available from the Integraf web site, or similar articles online, or from texts like the Shoebox Holography book, covers what to do next. Not much to it, really.

What is a hologram?
Most commonly, a hologram is a 3-D Picture. It looks like a window into the original scene from which it was created. Wikipedia's entry on Hologram/Holography
How little money/bother do I need to make one?
You can make your first hologram with about 2 hours of set up and about $100.
What is the cheapest way to make a hologram?
Laser Pointer Holography is the cheapest way to make a hologram. Also check out Integraf's Instructions for making a hologram.
Are the chemicals dangerous?
While some of the processing chemicals can be dangerous, processing schemes are available, such as JD-3, that can be used in elementary schools. If you want more information on the hazards of a particular chemical you can easily find it by Googling "MSDS" and the name of the chemical. This will provide you avenues to download the Material Safety Data Sheet for that particular chemical. (ie. MSDS Metol) Bear in mind that many of these sheets make slightly hazardous chemicals sound much more frightening than they really are. For practical recommendations on holographic chemical usage there's no substitute for asking on the Holography Forum.
What sort of time commitment is there for making a hologram?
You can make a hologram in about 2 hours the first time. Once you have some experience you can set up, expose and develop in under an hour.
When can I have the lights 'on' during the procedure of making a hologram?
Once the emulsion has become insensitive to to light. For silver-halide holograms this is after the hologram is bleached. For dichromated gelatin holograms this is after the fixing and rinsing steps.
What are the different kinds of holograms?
Click here - for the differences in the kinds of holograms
What is the single most important factor when making a hologram?
Stability! For simple holograms the required stability can be achieved by making sure that the plate and object touch and that there is no motion or vibration in the room during the exposure. For more complex set-ups involving a beamsplitter, all of the components after the beamsplitter need to be stable to within 1/4 of a fringe. Since fringe spacings range from about 600 to 2000 lines per mm the stability requirements can be quite high and involve building a Vibration Isolation Table/Bench. Pulse holography negates the need for stability but a suitable laser is expensive and dangerous to set up.
How Does a LASER work?
For a simple introduction to lasers read How Do LASERs work?.
Can I use a cheap red laser pointer to make holograms?
Yes! Almost any of them will work to some degree. If you take the beam and spread it through a lens (or remove the built-in collimating lens to produce a spread beam) and the illumination looks uniform and does not have black lines in it you can probably use it to make a hologram. The Infiniter 200 is a common choice because many have had success with it. The batteries in a red laser pointer don't last very long. It is quite common for holographers to cut the barrel off the pointer and wire up D-cell batteries in order for the laser to remain at full power longer.
Can I use a Green Laser Pointer to make holograms?
So far they seem to be unusable. And, some can be damaged if left on too long. But, by all means give it a try. Red pointers were thought unstable for some time but everyone was proved wrong.
Where are the Reference and Object beams in a Single Beam Reflection Hologram?
Single Beam Reflection (SBR) holograms are actually made with two beams. In a SBR Hologram the light travels to the film and we will call this light B1B2. Some of this light travels through the film. This is just the B2 part of the B1B2 light. It illuminates and reflects off the object back to the film. This is the object beam. This B2 light interferes with the B1 part of the original B1B2 within the film thickness. This creates a standing wave pattern thus the fringes or hologram. So there really are actually two beams used to create the hologram in a Single Beam Hologram.
Some uses for Everyday Items in holography
Click here for Everyday Items that can save you money in holography!
What is a Scratch-O-Gram?
A Scratch-O-Gram is a hand drawn hologram. It works by reflecting light and focusing it from a curved scratch to a point.
What Books are Available for Holography?
See the Books section.